A Charming Do Over

Previous: Double Trouble Spell Next: A Charming Do Over

The charmers and their pets accidentally switch bodies before a tea party.

At the charmhouse, Hazel and her friends need something special for the tea party. Posie decides they should have a tea h party they'll tell funny tea jokes. She made up a joke. And they must need another idea. The pets are playing around. And they decided they put on the tea and talent show starring their pets! That sounds tea-rrific!

They performed for their pets. Hazel tells Seven that he can have his cookie at the tea party. First Lavender does her talent show and her's is the sparkliest.

Next Posie does her's and she is the flutiest.

Then Hazel does her's, but it's not going smoothly. It has to be magical.

Hazel wants seven to perform a magic trick make it a rainbow appear.She tells him to meow the magic words she taught him to do.It was meow-a-kazoo.Posie admits that seven is cute enough by playing his ball of yarn.Hazel tells that he can it I know he can.Then she knocks seven's hat off.Hazel runs and get it but drops her's.She tries it with magic but she's wearing seven's hat and seven was wearing hazel's hat.Hazel tries it again but this time with a spell.But suddenly it was a misspelled!Now Hazel has seven's voice.And Hazel who has seven's voice.Then seven that has hazel's voice starts to get hectic.Seven who has Hazel's voice tells her friends to give someone her/his wand.But holding a wand would be much easier if she/he had fingers.

The charmers are wearing silver bows in this episode

Seven pilots the broom for the first time.

This is the first time a charmer switches bodies. 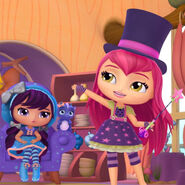 Add a photo to this gallery
Retrieved from "https://little-charmers.fandom.com/wiki/Charming_Pets?oldid=14888"
Community content is available under CC-BY-SA unless otherwise noted.