Lavender is a main character of Little Charmers. She is best friends with Hazel and Posie.

Lavender has olive skin with lavender eyes and pink lips. Her long, dark purple hair is worn in low curled pigtails held with peach scrunchies to match the peach sequined bow sewn to her blue cap. Her bangs are brushed to the side and reach her eyes. Because of this, she's becoming very biethnic but her skin is more darker than her best friends.

Lavender wears an indigo top with a pale indigo collar and two tiny peach bows. Her skirt has peach ruffles lining the bottom and a pattern of pale blue and purple dots. She also wears pale blue and indigo striped tights and blue boots with peach strings, purple bottom, and a pale blue toe with tiny dots.

Wise and calm, Lavender is educated with both potions and spells, as well as fashion and design. Both of which she loves- just as much as accessorizing and mix-and-match. She usually spends her time studying or playing dress up with her friends or Flare.

Lavender can also be a bit blunt with her words, and for knowledge she will do whatever she has to, even things she may not want to; like kissing a frog.

Brilliant with potions and fashion, Lavender is a Potionista; allowing her to mix her two magical talents into one.

Lavender's wand is a thin, blue volumetric flask with the bottom part decorated with her trademark peach bow. Being the wand of a potion specialist Lavender's wand, differently from the other two Charmers' ones, can also be filled with a potion and cast magics based on the potion itself or charge other people's wands with the potion[1]. At the top is where the potion is poured and seeps out, as well as where magic comes out.

A blue stick with curled handle and a peach bow below it. The purple broom is very puffy with large dots of lilac all over it. Around the middle is a bright indigo band, giving the bristles a bubbled shape.

Lavender showing her specialty, casting fashion magic in the company of Flare. 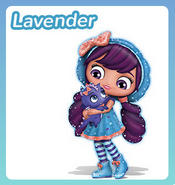 Promo picture of Lavender with Flare. 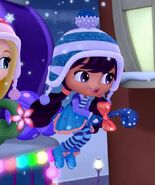 Add a photo to this gallery
Merchandise 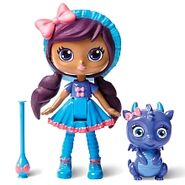 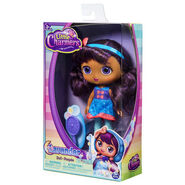 Add a photo to this gallery
Retrieved from "https://little-charmers.fandom.com/wiki/Lavender?oldid=15137"
Community content is available under CC-BY-SA unless otherwise noted.