Seven is a character in Little Charmers. He belongs to Hazel. Seven's meows and noises are provided by Andrew Sabiston. Seven is always by Hazel's side even at bedtime.

Although he appears feminine, Seven is actually a male cat. He has purple fur with darker purple stripes along his head, back, legs, and tail. The fur at his chest and stomach is lavender in color, matching his muzzle. He has a tiny, dark indigo nose. His eyes are gold, matching Hazel's own. Around his neck is a pale, mint green collar with a bow attached that has a fuchsia star in the center.

Seven is an unpredictable cat with a mind of his own. Fickle as he is, he cares deeply for Hazel and always remains by her side -- even when she ignores his protests or warnings. He in fact shows a wiser approach than Hazel on magical matters and in all things in general, like trying to discourage her from using her mother's book of spells or peeking in her birthday present. He shows a very practical attitude towards life, not liking corny moments or songs and expressing his opinion in no uncertain terms; this along being no eager in doing things that are fun for others, demostrating a pretty phlegmatic behaviour, like all cats.

Although it may not be magic, Seven has the ability to tell when a magical mistake is going to happen. To warn others, he has a tendency to make expressions or shake his head in a fervent manner.

Seven, being a main character of the series, appears in every episode of the show. 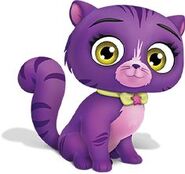 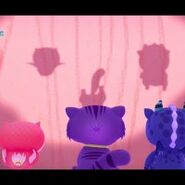 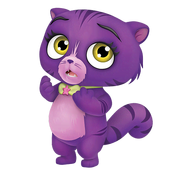 Add a photo to this gallery
Retrieved from "https://little-charmers.fandom.com/wiki/Seven?oldid=14043"
Community content is available under CC-BY-SA unless otherwise noted.